2 Comments
By dean.chahim Experiences, On Traveling

This post is part two (see part one here) of a series on the space we occupy as travelers and outsiders, and the contradictions between our lives at home and our lives abroad. These posts were written together weeks, months, or even a year after the experience, but they are presented here together and arranged by theme rather than in chronological order.

Vignettes of life as an outsider, from two opposite ends of the world:

As an American man in Tajikistan – even with Afghan origin – I was able to step tepidly into the generally closed world of the kitchen – and by extension, women’s lives – through my unusual (for a Tajik male) interest in cooking. As we cut onions,sitting on opposite sides of the kitchen carpet, women began to open up day by day. They not only showed me how to cook plov, but told me about their desires to wear the Russian clothes their husbands prohibited, their frustrations with unfaithful Tajik men, and their horror that an Afghan-American girl (born in the U.S. like me) – which they called a “free bird” – would choose to marry a Tajik man and “put herself in a cage.” I felt astonished and honored to be let into their world – even for the fleeting moments while the men were out working and we were alone to gossip in hushed tones over crackle of the onions in the plov pot. 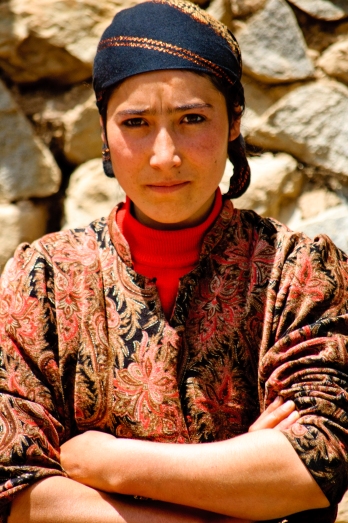 Shepherd woman near Penjikent. During the summer months, women go alone to the upper pastures with the animals. When we came to the seasonal village, unlike in nearly any other scenario (with men around), the women were fighting to get their picture taken, and to take photos of one another.

I lived the dream of the new South Africa: I went from living in Soweto to a mansion in Cape Town in just four weeks. It is the dream few South Africans can actually realize in a lifetime, but is part of the everyday experience of privileged travelers (like me) who are able to straddle the widening gap between the worlds of the rich and the poor in South Africa and the world more generally.

I started humbly, living with a lower “middle class” black family in the township of Soweto, Johannesburg, where I learned just enough of the elaborate hand-signal system to be able to stop a minibus taxi. I’d say my sawumbonas to the exclusively black passengers, who would invariably stare and giggle as the “white man” struggled to close the half-broken door when the taxi had already started moving again. I’d then – in my best attempt to sound like a regular – yell “Driver, sho’t left!” and hop off to meet my new friend Nceba, who supports his entire family on his grocery store clerk wages. We ate French toast I made while listening to Zulu rap and talking about Osho, meditation, girls, and job prospects for him to work as an aspiring filmmaker in South Africa. 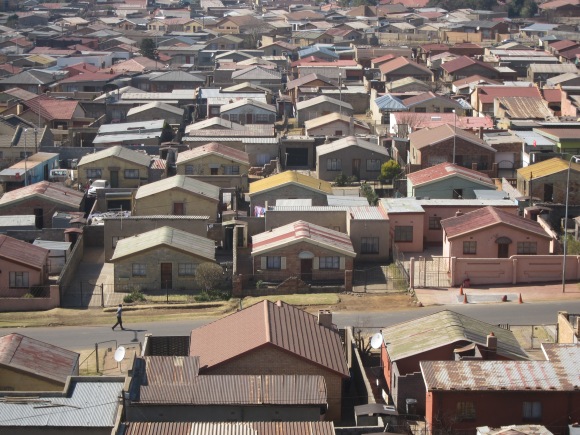 Soweto’s infamous ‘matchbox houses’ from above. 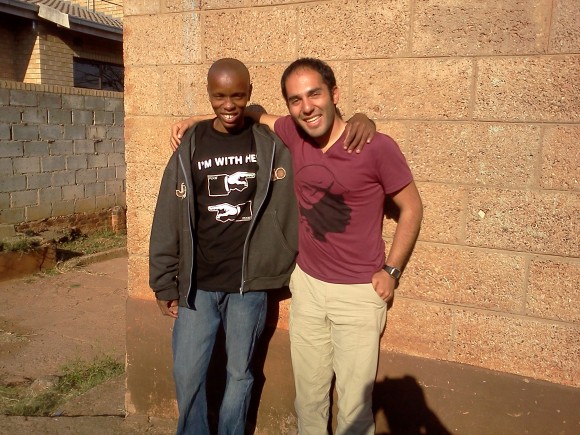 My friend Nceba. I have to thank SERVAS for connecting us.

By the end of the month, I woke up in the mansion of wonderful friends of a friend in a ritzy tree-lined suburb of Cape Town. It was only the next day, when we visited the office and we pull into the CEO parking spot that I realized just how far I’d come in the new South Africa. My friends, despite having colored roots, never ceased to express their surprise that I would take taxis, eat kotas or gatsbys, and stay in Soweto voluntarily. 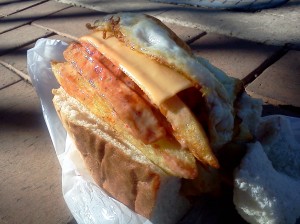 The famed Kota sandwich of the South African townships. Similar to “bunny chow”. To make: hollow out a quarter of a loaf (hence the name) of white bread, spread spicy Indian mango achaar on it, then top with fries, and assorted processed meats, egg, and other sauces. 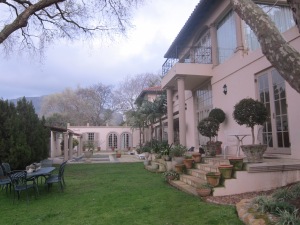 Dinner with distinguished guests. I was so humbled to meet the friends of the family – poets, activists, and academics who have been intimately involved in the anti-apartheid struggle and the Truth and Reconciliation Committee.

Many whites and even Indians I met were scared by the very idea of entering the enormous township. Sowetans attributed this to the fact that people still believe they are out of control “baboons.” I told those scared of Soweto the same thing I told everyone: Many (though certainly not all) parts of Soweto are lovely places where you find children playing in the streets, parents greeting every passerby in one of six different languages – “Dumayla! Sawumbona! Hello…” etc., and the smell of braai (barbecue) wafting between the beats of South African hip hop. It is most unlike most any other residential part of Johannesburg, where you’ll find only hot electric fences and residents relaxed only when behind their cold three meter walls.

In Tajikistan, I was an “honorary woman” – a gender crossing typically reserved for women (who become “honorary men”). In South Africa, I may not have been an honorary anything – but without missing a beat, I was equally invited to sit in the shebeens of Soweto and dine with the elite in Constantia.

There is something unique about being a transient outsider, a “traveler” (or a “tourist,” as much as we like to deny being one), which allows us to – when lucky – sidestep the social stigmas and personal preconceptions that divide men and women, the poor and the rich, the black and the white, and so on.

We are, of course, enabled by our own auspicious privilege that brings us to far-flung places like Burkina Faso in the first place. And while we don’t face the same social stigma and have not been steeped in the same preconceptions that locals have, we come with our own baggage of a different sort (e.g. “Africa is a country” or “all Muslim women are oppressed”).

Every day as I travel, I find myself breaking down stereotypes both in my own mind and those of the people I meet. It’s easy for me to judge those wealthier residents in South Africa for harboring such ignorance about those living just outside their suburbs, or the men in Tajikistan for being oblivious to their wives. But I hold back. The ignorance of those I meet reminds me of my own distance from marginalized communities in my backyard.