“This is our gas”: Family Outings in Kufr Qaddum, Palestine

Every Friday at 9AM, the crowd of males, ranging from barely five to sixty-five years old, gathers at the center of town for the weekly trip five hundred meters down the road to the Israeli settlement. They bring with them all the essentials for a father and son outing: flags, spare tires, and extra gasoline. (You know, in case they get a flat, run out of gas, and need to flag someone down on the highway…)

Down the road, the Israeli soldiers rouse themselves, gather their M16s and tear gas launchers, and walk down to their end of the road to defend the illegal Israeli settlement. They may consider themselves lucky – here the protests are relatively quiet in comparison to the other flashpoints in the area. The soldiers mentally draw the line in the blackened dirt where the demonstrators will not be able to cross. This line – and the locked gate beyond – are the reason the protests occur weekly. The road has been closed for the “security” of the settlement, and thus the community of Kufr Qaddum must now take a 25 minute detour to reach the main road to Nablus, not to mention being blocked from many of their lands.

Every week it’s the same. Except this Friday – today – is Eid, and Monir (name changed), the middle-aged organizer of the weekly demonstrations, has a trick up his sleeve. All week they’ve spread the same message by word of mouth and blaring over the mosque loudspeakers: even on Eid, there will be our weekly protest at 9AM, be ready.

But this morning, they quickly spread the word that the protest was moved to the afternoon so you can enjoy your morning with the family on the special day of Eid Al Adha and the Israelis will be caught  off guard.

The crowd gathers around 3PM as per the new plan and, after a few words from Monir over the loudspeaker, the group is off, with the enthusiasm and calm of a well-rehearsed theater troupe. The props for the fireworks are all in place and the stage is set. It’s street theater at its best.

The shabab (youngsters) lead the march, followed by the older men – the directors of the show – and the little ones in tow. The handful of internationals (like myself) mostly stick to the back – we’re new to this play and we don’t know the blocking quite yet.

But as I tiptoe downstage to put my camera to use (I have no zoom lens), I watch as we pass line after line of blackened ash from the tires from prior protests. As we near the end of the scorched earth, there is a certain tension in the air as the shabab  and old directors eye the hills and the road beyond: no soldiers yet? Go boys! – “Yala shabab!” they yell.

Finally we’re in fresh ground, just a hundred meters from the red-roofed settlement and the directors yell that we’re far enough. And so the shabab, giddy to be the closest they’ve ever been to the settlement, begin to prepare their “gas.” Tires stacked, brush piled, and petrol splashed, the show begins with a whoosh as matches find their mark.

Pointing at the black smoke barreling into the sky and downwind into the settlement, Monir, says to us, the internationals, “This is the Palestinian gas. They shoot [tear] gas at us. This is our gas.”

The smoke begins to drift into the settlement, and moments later a commotion begins. Not knowing Arabic well, my good friend Eva (a regular at the protests who invited me) and I only assume we should run – perhaps they’ve spotted soldiers. Soon it seems everyone is running, but no one seems to have a destination. We’re not sure if this is part of the script.

Finally it becomes clear that a few soldiers really are on the hills above, their distinctive silhouettes barely visible above the brush. The show is back on track. The shabab  begin their featured dance routine – gathering rocks behind their backs and rushing into position behind bushes and trees in the low hills, egged on by their peers. The soldiers begin to gather in number and slowly make their way to the very top of the hill. From two they’ve grown to ten.

A few shabab with something to prove begin to move towards the soldiers but the old directors yell them back down. They know better; they have seen too many old friends get hurt in the intifadas. A poor family – whose home is right at the base of the hill – is forced to send their Eid guests packing because they’re afraid the soldiers will storm in and use their home as a base again as they regularly do.

After a few more minutes in a standoff, the directors close the curtains. “Yala shabab!” they yell. Their sons, nephews, and grandchildren reluctantly put down their rocks and join the procession back home. They walk home with an air of victory – luckily there were no tragedies today. And there’s no more to be done this time – the smoke will make for an acrid Shabat tonight in the illegal settlement.

Once back at the gathering point, Monir brings us a chocolate bar from his shop. As we sit on the concrete porch watching the sun go down between the gray clouds hanging low in the valley, we ask if the day’s demonstration was successful. He responds,

“Yes. This is a message that there is no Eid under occupation. Our real Eid [‘celebration’] will be when there is no settlements [sic] here.”

He pauses for a moment before adding,

“No one in Palestine likes to demonstrate just to demonstrate. We do not like the [tear] gas…All we want is our rights, to reach our lands freely and take care of our harvest….We don’t hate anybody. We love all the people in the world. But we love ourselves also. It’s impossible to live with these settlements on our land.”

As our taxi arrives to take us back to the village we’re staying in, Monir thanks us for coming – not because we stop the gas with our passports anymore (today we were simply lucky), but because we can spread the word. So here’s to you Monir, Kufr Qaddum, and the broader struggle for equal rights for Palestinians everywhere. 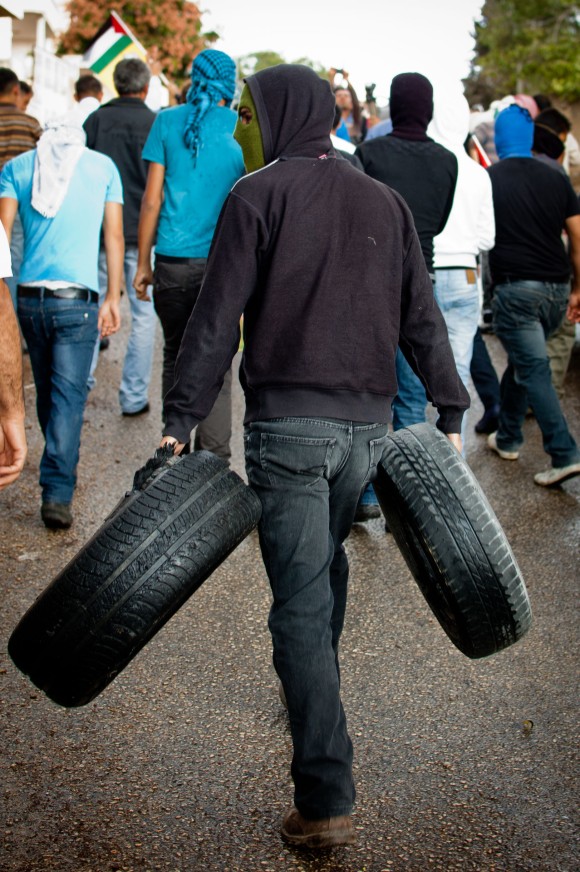 This little man with his fake gun and his similarly-clad brother are just trying to fit in with the big boys. It would be easy to put photos like these on right-wing websites as
‘proof’ Palestinian children are violent ‘terrorists’. But that would be missing the point: they live in an oppressive warzone. American boys play with toy guns constantly and yet we have never even seen violence firsthand. This is their everyday life. 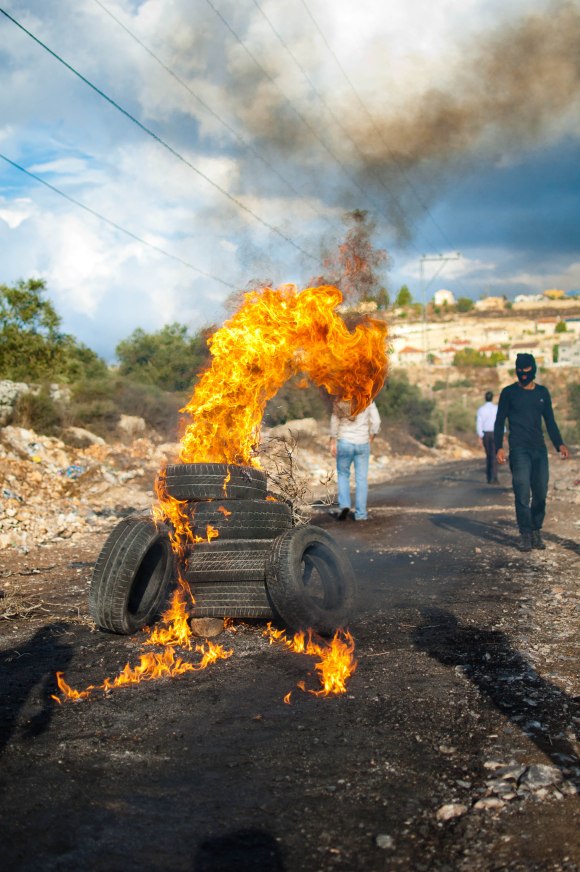 Setting their ‘gas’ alight. The red-roofed houses in the background are from the illegal Israeli settlement.

The illegal Israeli settlement as a whole, encroaching into the village’s valley lands below.

The same boy, running with the determination no child should ever have to mimic. The irony of his toy gun is that the protest – as with almost all protests in Palestine today – is non-violent. 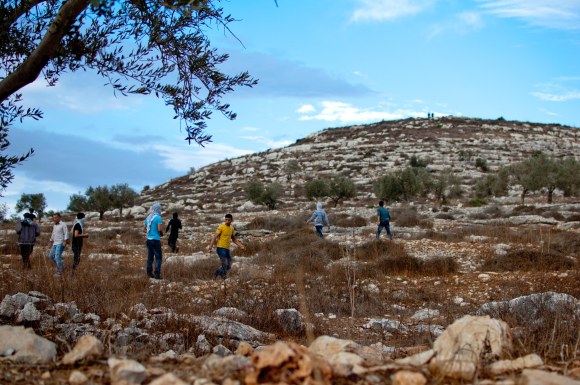 The shabab (youth) playing chicken with the soldiers, whose silhouettes are barely visible at the top of the hill. 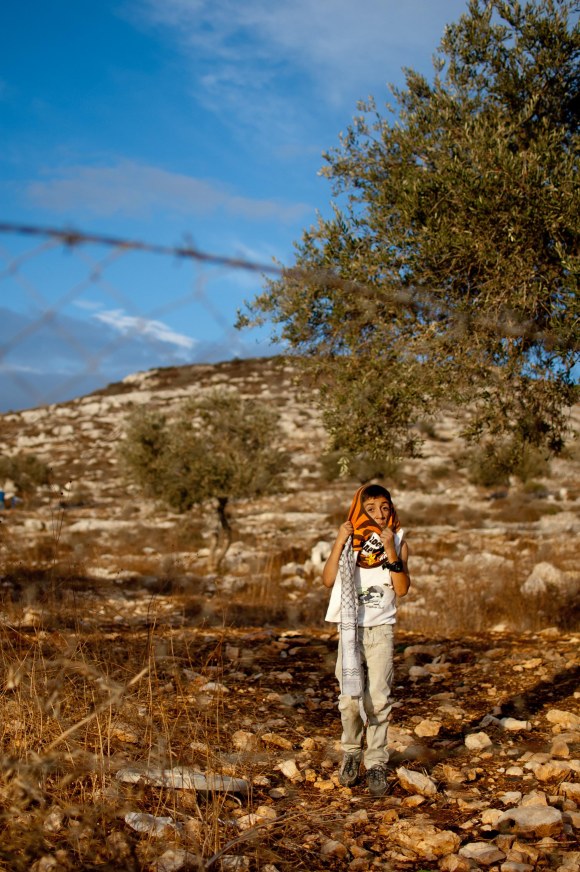 Two international activists look on at the scene solemnly.