The following two posts are about my brief experience working on a Fazenda Pura Vida permaculture cacao (cocoa, i.e. chocolate) farm in Bahia, Brazil. I’ve backdated them to when I wrote them by hand in my journal (there was no electricity). I worked as a volunteer for a week, and for most of the time I was alone with my thoughts and the river. Much to my surprise, the only foreigner around was the wonderful French refugee, Harold, who helped found and now runs the fazenda. And he was off selling chocolate most of the time. So it was me and the wonderful locals – this post is about them.

This is a journey deep into the Atlantic Rainforest, where cacao grows under the shade of huge, ancient trees and men swing their machetes six days a week to grow and harvest the beans that will bring us the treat that we all know and love – chocolate.

It’s a journey through the life of those growing cacao on the banks of a wide river, near a sleepy village in Bahia, Brazil. It’s the story of men, women, and children who live barefooted and free, knowing the rainforest upside down and inside out, never learning to read because notebooks are too expensive and short-term contracts never allow children to complete a whole year of school. Washing in the river, cooking rice and beans and hot, sweet coffee over the fire, fishing by sunset and eating fruit straight from the trees, these people might be illiterate, but live a life full in ways that we are only beginning to understand.

-The opening lines of the tattered book produced by the NGO about the Fazenda that I found in the cabin. 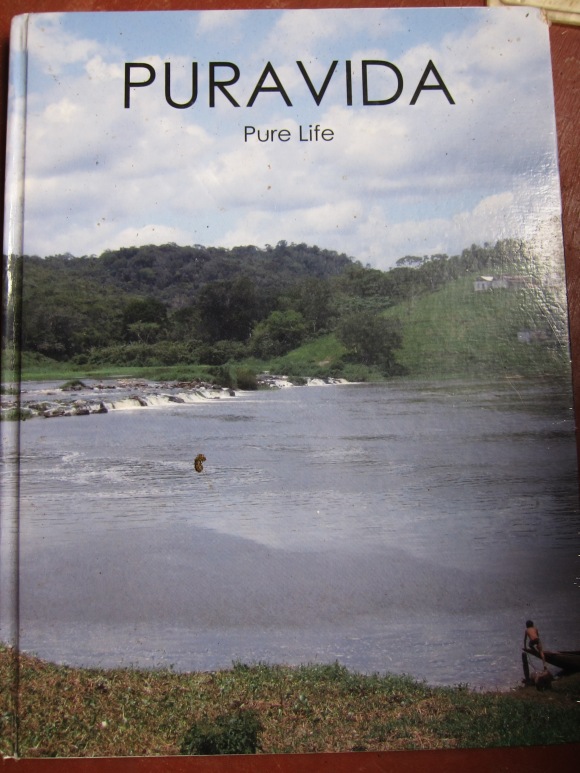 The book the NGO produced. The NGO is now somewhat defunct, but the fazenda and Harold remain. 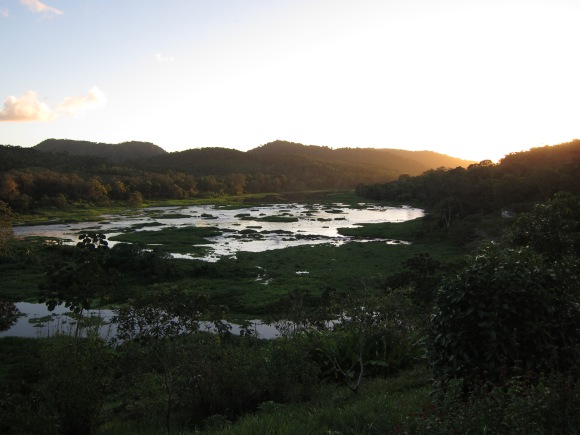 Sunset over the river – the view from the cabin where I swung on the hammocks. After the sun went down, it was just me and the cat. The only way to the village was across the river in a wooden canoe – which I was helplessly bad at piloting.

Amidst the constant roar of the little waterfall, the crickets, and the birds is another beautiful sound – Bocamole’s (aka Boca) singing and humming as he works on the fazenda. It’s almost exactly as described by Prof. Jonathan Warren in Aracuai in his book chapter (link to the book here). It’s a beautiful, truly unique, and seemingly very African sound. I can’t really understand the lyrics, to the extent that I can’t be sure they are Portuguese. (But then again, I’m not entirely sure the Bahian dialect is even Portuguese…just kidding!) It’s absolutely enchanting, regardless. The tune of the songs remind me of the sort of hymns one associates with African-American churches of the civil rights era – the sorts of songs sung to give strength in the face of oppression and difficulties.

Boca sings them proudly as he wanders around the Fazenda, smoking his hand-rolled cigarros through his mostly toothless mouth (probably related to the smoking – does not help with understanding him!). He has the most enchanting grin, as does the other cacao worker, Toni. Perhaps it’s the toothlessness? 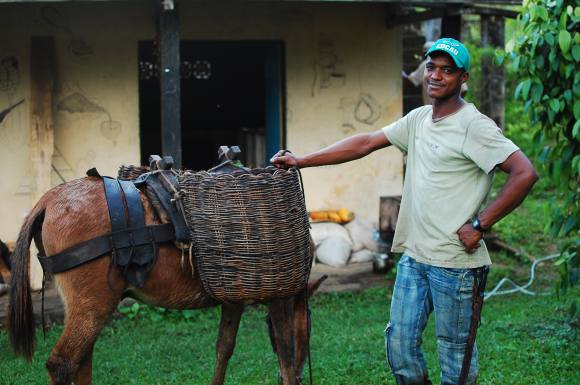 Toni with the cacao harvest. Boca, sadly, did not like pictures.

Whenever I tell Boca I like his singing, he grins sheepishly and seems mostly surprised. I ask him what kind of music it is but I’m not sure we understand each other since he just says “Bahiana” or even “Forro.” It think it’s the former, but I’d love a more specific name.

Today Boca stopped by for coffee after putting his fermented beans up to dry. Over coffee I asked him about the dam in the river Harold told me the government is planning. He said it was really bad – his house, his fields…everything would be flooded. The fish would be gone. He loves it here, but if they build the dam he’d have to leave.

Boca and Toni both live together incredibly modestly. They are bachelors, even though Toni has five kids (he divorced) and Boca is probably in his mid-40s. Their house has four pots and exactly two forks, two plates, and two cups. Just enough. They cook on a wood stove outside. They have a few chickens. They don’t even have hammocks – just little wood benches. They work hard. And they both seem effervescently happy. Whatever pain Boca may hold inside (why did he never marry?) he appears deeply content as he skips down the path from the fazenda singing in between bites of a freshly picked banana.

Like Jesusa’s giggles, Boca’s singing makes me once again question what we mean by “development” and what creates happiness.

And yet I am also challenged by the rather plain fact that – after growing up as I did – I would not be happy with Boca’s life.

So the question is why? Why can Boca be happy as such and I cannot?

It would be too easy to blame our upbringing amidst material excess. One cannot otherwise explain people like Harold, who are similarly content – if occasionally frustrated – with life in Bahia. Despite the occasional difficulties on the fazenda, Harold was wholly uninterested in reintegrating into the life and oppression admidst “modernity” in France.

If this seems like an incomplete thought, well, it is.